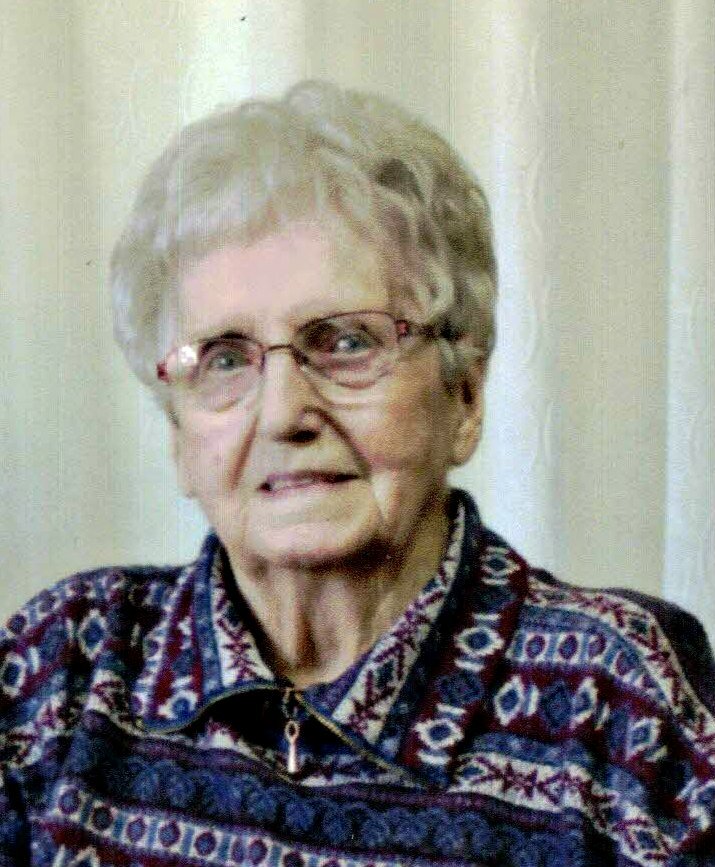 Please share a memory of Lulu to include in a keepsake book for family and friends.
View Tribute Book
Lulu Irene (Forbenius) Swenson – Lulu “Lou” died September 7, 2022 at the Bethany Home at the age of 92. She was born near Linconville, Kansas on September 8, 1929, the fourth child of Karl and Katherine (Beisel) Forbenius. Lou was raised on the family homestead with her two older brothers, older sister and one younger sister. Growing up she was a member of the St. Johns Lutheran Church. She attended Lincolnville Elementary School and graduated from Lincolnville High School. After graduation, Lou moved to McPherson, Kansas. She married Raynold Swenson on April 16, 1949, and was married for 56 years until Raynold’s passing in 2005. She and Raynold had two children, son Dale and daughter Debra, and five grandchildren, Damian, Danyel, Jessica, Katie and Kendal. Lou worked in the medical field most of her adult life, starting in 1959 through 1967, she worked for the Lindsborg Community Hospital. In 1967, she started working for Dr. Murfitt, where she remained for 17 years. In 1984, after a brief stent at the Bethany Home, she returned to the hospital where she worked in home health until her retirement. Lou enjoyed her work and cared for many people in the Lindsborg community. In her retirement, Lou helped run the TACOL thrift store for many years. Lou was a child of God and served him in many ways. She was a member of the Bethany Lutheran Church, where she taught Sunday and Bible School. She enjoyed teaching and working with the children of the church. Lou was a competitive person, it didn’t matter if it was cards, sports or Wii bowling, she played to win. She played on several softball teams as a pitcher, and competed in the women’s league at the Lindsborg Bowling Center. After “retiring” from participating in sports, Lou watched from the stands, as she traveled to various sporting events watching her grandchildren play football, basketball, volleyball, tennis, and track and field. She was a fan of baseball and often watched the Chicago Cubs on WGN. Lou enjoyed the outdoors, and would often take the grandkids fishing, where she was never afraid to bait a hook or take a fish off. She was also a lover of music, everything from George Jones, to the Lawrence Welk Show, to Gospel, but she was partial to the music heard while attending all of her grandchildren’s choir and band concerts. Lou was proceeded in death by her husband, Raynold, parents Karl and Katherine, brothers Marion and E. Dean Forbenius, sisters Ruth Forbenius and Betty Beneke and son-in-law, Tony Patterson. Lou is survived by son, Dale (Julie) Swenson, daughter Debra Patterson, and grandchildren: Damian Vosburg, Danyel Patterson, Jessica Patterson, Katie Swenson (Mike and Sydney), and Kendal Swenson (Amber). The family would like to express our deepest gratitude to the wonderful people from Kindred Hospice and the Bethany Home for their compassion and loving care of Lou over the final days of her life. Visitation will be from 5:00 p.m. to 7:00 p.m., Sunday, September 11, 2022 at Crick-Christians Funeral Home, 103 N. Washington, Lindsborg. Private family graveside services will be held at Elmwood Cemetery. In lieu of flowers the family requests that memorials be made to Kindred Hospice or the Bethany Home. Memorials may be sent in care of Crick-Christians Funeral Home, 103 N. Washington, Lindsborg, KS 67456.
Sunday
11
September

Share Your Memory of
Lulu
Upload Your Memory View All Memories
Be the first to upload a memory!
Share A Memory
Send Flowers
Plant a Tree