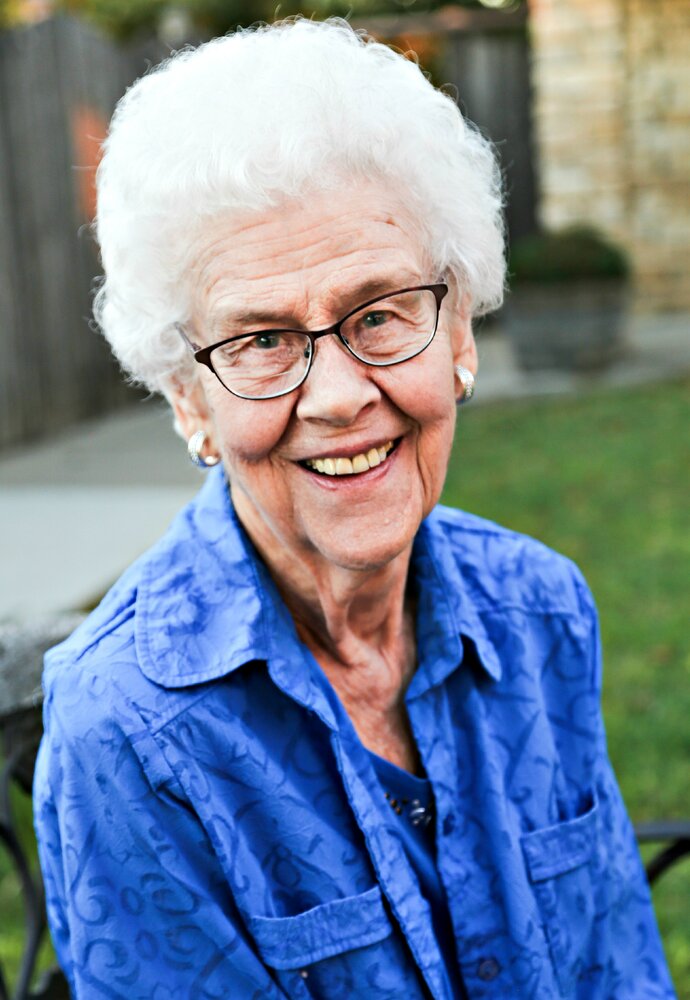 Please share a memory of Carolyn to include in a keepsake book for family and friends.
View Tribute Book
Carolyn Mae Johnson, 93, formerly of Assaria passed away September 19, 2022 at Homestead Estates, Wichita. Carolyn was born September 29, 1928, in Salina, Kansas, the oldest of three children to Edgar and Ruby Johnson of Assaria, Kansas. Carolyn lived in Assaria for the majority of her life. In 1946, she graduated from Assaria High School and then attended Brown Mackie College in Salina, Kansas. She worked at Lynch Grain until she married Richard H. Johnson on June 4, 1950. She was proud of her Swedish heritage and enjoyed her role as a farmer’s wife and mother to their three children. As a member of Assaria Lutheran Church, she joyfully served in many capacities, including Visitation Committee, Women of the Evangelical Lutheran Church in America, Mary Group, XYZ, Choir, quilting, communion preparation, and serving in the kitchen. Her other community activities included Extension Homemakers Unit and 4H. She and her husband loved to spend time with their friends in Salina Twirlers Square Dance Club. She was a loving care-giver to her husband until his death after 46 years of marriage. She continued to live independently on their farm until 2016 when she moved first to Lindsborg then to Wichita until her death. Carolyn was preceded in death by her husband, Richard Johnson, her parents, Edgar and Ruby Johnson, and her brother, Eldon Johnson. She is survived by her sister, Doris Blomquist of Assaria, son, Dale (Linda), of Carlsbad, California, and daughters Sharon (Scott) Moser of Wichita and Anita (Jeff) Wesche of Virginia Beach, Virginia, seven grandchildren and four great-grandchildren. Visitation with the family will be from 6:30p.m. to 8:30 p.m., Friday, September 23, at Crick-Christians Funeral Home, Lindsborg, KS. Funeral services will be held 10:30 a.m., Saturday, September 24, at Assaria Lutheran Church, Assaria, KS with Pastor Dean Apel officiating. Burial will follow at Assaria Lutheran Cemetery. Memorial contributions may be made to the Assaria Lutheran Church Kitchen Fund. Memorials may be sent in care of Crick-Christians Funeral Home, 103 N. Washington, Lindsborg, KS 67456.
Friday
23
September

Share Your Memory of
Carolyn
Upload Your Memory View All Memories
Be the first to upload a memory!
Share A Memory
Send Flowers
Plant a Tree