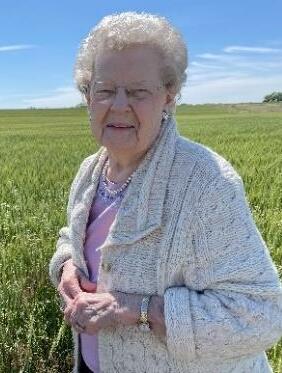 Please share a memory of Maxine to include in a keepsake book for family and friends.
View Tribute Book
Una Maxine (Lehman) Clark died peacefully at her home on December 16, 2022, in Salina, Kansas at the age of 92. Maxine is survived by her children, Randy (Janice) Clark of Salina, Kansas, and Barry Clark of Dallas, Texas; her grandchildren Peter Clark of Salina, Kansas, and Brian (Alice) Clark of Portland, Oregon. She is preceded in death by her husband Bill, her parents Grace and Earl Lehman, her sister Earlene, her brother Jerry, and daughter-in-law Robin. Maxine was born on December 26, 1929, at St. John’s Hospital in Salina to Anna Grace and Earl Navarre Lehman. They lived in an old farmhouse northwest of Roxbury, across Gypsum Creek from her grandparents’ farm. Maxine earned good grades (despite having to walk a mile and a quarter each way) at Hope Grade School down the road to the east. While attending Roxbury Rural High School, she lived with families in town during the week, helping them with household tasks and successfully keeping up with her homework. She graduated in May 1947. In November of 1947, she married James Billy “Bill” Clark, a young man who was “sure of himself” and a recent veteran of World War II. The wedding was at First United Methodist Church in Salina. Initially, the newlywed couple lived in Roxbury. She stayed home to care for Randy while Bill worked in the oil fields. After a few years, they moved to a home in Lindsborg. As the boys got older, Maxine’s career changed from part-time jobs when she began working for Ben Franklin 5&10 Store. She started as a Salesperson and was later promoted to Assistant Manager. Maxine and Bill moved to Valley Center in 1967 and lived there for 9 years. In 1976, they moved to Wichita where she lived for 42 years. Bill worked in wholesale lumber sales from 1960 until he passed away in 2002. During her professional career as an Administrative Assistant, Maxine worked for Valley Center School District #262 as well as for two insurance companies. Maxine formally retired in 1991. In 2018, she moved to Eaglecrest Retirement Community in Salina. Maxine’s maternal grandparents were both ordained Methodist ministers. She maintained her membership with the Methodist church in Lindsborg and later, Wichita. She found great comfort in her personal faith. Maxine created and maintained a sense of unconditional support and acceptance for her children and grandchildren their whole lives. They also remember her as a patient and kind woman as well as a sweet and doting mother and grandmother who was always there for her family. Visitation will be at Crick-Christians Funeral Home in Lindsborg between 1 and 3 pm December 29th. A funeral service will start at 3 pm after the visitation. A reception for family and friends to celebrate her life will be held following the service. Private interment will be on December 30th at Valley View Cemetery at Roxbury. We will say our final farewells after a brief ceremony before she is laid to rest next to her husband. Instead of flowers, any mourners so inclined may send memorial donations designated to “Hospice of Salina”. Maxine suggested that mourners may alternately send memorial donations directly to special organizations of their choice. Condolences and memorials can be sent in-care-of Crick-Christians Funeral Home, 103 North Washington St, Lindsborg, KS 67456. The family would like to thank the caregivers and staff of Eaglecrest Retirement Community for their exceptional dedication in recent years as well as caregivers with Hospice of Salina who helped ensure her final days were peaceful and comfortable.
Thursday
29
December

Share Your Memory of
Maxine
Upload Your Memory View All Memories
Be the first to upload a memory!
Share A Memory
Send Flowers
Plant a Tree