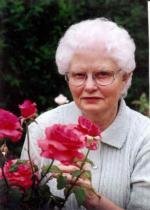 Isla Rose Hagstrand Turner, 89, passed away, August 14, 2010 in Lindsborg, Ks. She will be remembered as a wonderful wife, mother and grandmother. She was preceded in death by her parents, Ruben and Ethel Hagstrand (Johnson), and her brother Melvin Hagstrand. She met her husband John "Jack" E. Turner at the USO in Kansas City, Mo in September of 1942. Jack and Isla were married in Lindsborg, Ks. on March 21, 1944 and celebrated 66 years of marriage. Isla Rose graduated from Trinity Lutheran Hospital in September and received her R.N. State Board License November 1942. Her R. N. career at the Lindsborg Community Hospital and the Medical Clinic spanned 45 years until her retirement in 1986. She was a participant in the Bethany College Oratorio Society and served as Alto Secretary for over 30 years. She is survived by her husband, Jack, sons, James (Jan), Lindsborg, Hal (Michele) Des Moines, Keith (Wanda), North Delta, B.C. Canada, daughter, Susan (Michael Mueller, M.D.) Wichita. Seven grandchildren, Shusten (Ben) Johnson, Annika Turnquist, Joshua Rodrock-Mueller, Ryan, Michael, Haley and Stuart Turner. Visitation will be Wednesday, August 18 from 5-7:00 P.M. at the Christians Funeral Home, Lindsborg. A funeral service will be held at Bethany Lutheran Church, Lindsborg, Ks at 11:00 a.m. on Thursday, August 19th. Private burial will be at Elmwood Cemetery, Lindsborg. Memorials may be designated to Bethany Home or Bethany Lutheran Church, Lindsborg, Ks. Online condolences at www.christiansfuneralhome.com
Services for Isla Turner
There are no events scheduled. You can still show your support by planting a tree in memory of Isla Turner.
Visit the Tribute Store

Share Your Memory of
Isla
Upload Your Memory View All Memories
Be the first to upload a memory!
Share A Memory
Plant a Tree