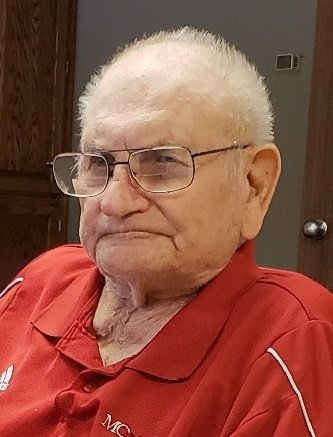 Raymond William Johnson, 96, of Roxbury passed away Friday, September 21, 2018 at The Cedars Nursing Home in McPherson.  Raymond was born July 2, 1922 in Roxbury, KS to the late Arthur W. and Buelah (Smith) Johnson.  He married Lois Elaine Vidricksen on July 31, 1950 at St. John’s Lutheran Church, in Salina.

He served in the Army during WWII.  He worked as a farmer and on dirt construction.

The funeral will be held 10:00 a.m. on Friday, September 28 at Roxbury United Parish, Roxbury, KS.  Interment will follow at Valley View Cemetery, Roxbury.

Memorial contributions may be made to the Roxbury United Parish.  Memorials may be sent in care of Christians Funeral Home, 103 N. Washington, Lindsborg, KS 67456.

Share Your Memory of
Raymond
Upload Your Memory View All Memories
Be the first to upload a memory!
Share A Memory
Send Flowers
Plant a Tree