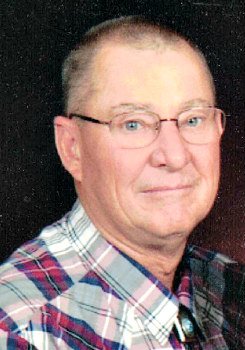 Edward “Ed” Dinkel was born August 26, 1944 at Hays Hospital to the late Fred and Katie (Flax) Dinkel. He passed away Wednesday, February 24, 2021, at home surrounded by his wife, children, and hospice nurse. He grew up on the family farm near Cedar Bluff Lake. His parents had a dairy and Ed enjoyed going to the pasture to bring the cows to the barn. Growing up, Ed was one of fourteen children. He enjoyed the outdoors. Ed was quite a handyman, and he could fix anything. He refurbished many bicycles over the years and donated them for use by others. He was married to Lou Ann Dinkel. She passed away in 1984. They had 2 sons who passed away in infancy. Ed married Kathy Minnich in 1986 and they lived in Salina until 1999. They then moved to rural Assaria. Ed worked construction for many years, but found his true calling driving a semi-truck. He drove a semi for UPS and retired after 20 years of service. Ed is survived by his wife: Kathy; daughter: Lisa Newport; sons: Loren Minnich and Eric Dinkel; brothers: Harold, Henry, Fred, and Steve; sisters: Virginia, Helen, Bernadette, Marjorie, Marilyn, and Vera; as well as 8 grandchildren, whom he really loved and enjoyed. He was preceded in death by his parents; first wife: Lou Ann; sons: Darrell and Darren; sister: Kathleen; and brothers: Chester and Mike. Ed always had a smile. We will miss Ed and his smile. Memorial Mass will be held 11:00 a.m., Monday, March 1, 2021 at Saint Elizabeth Ann Seaton Catholic Church, in Salina, with Fr. Keith Weber, officiating. Inurnment will follow in Smoky Hill Cemtery, at Coronado Heights. Memorial contributions may be made to Saint Elizabeth Ann Seaton Catholic Church. Memorials may be sent in care of Crick-Christians Funeral Home, 103 N. Washington, Lindsborg, KS 67456.
Monday
1
March

Share Your Memory of
Ed
Upload Your Memory View All Memories
Be the first to upload a memory!
Share A Memory
Send Flowers
Plant a Tree