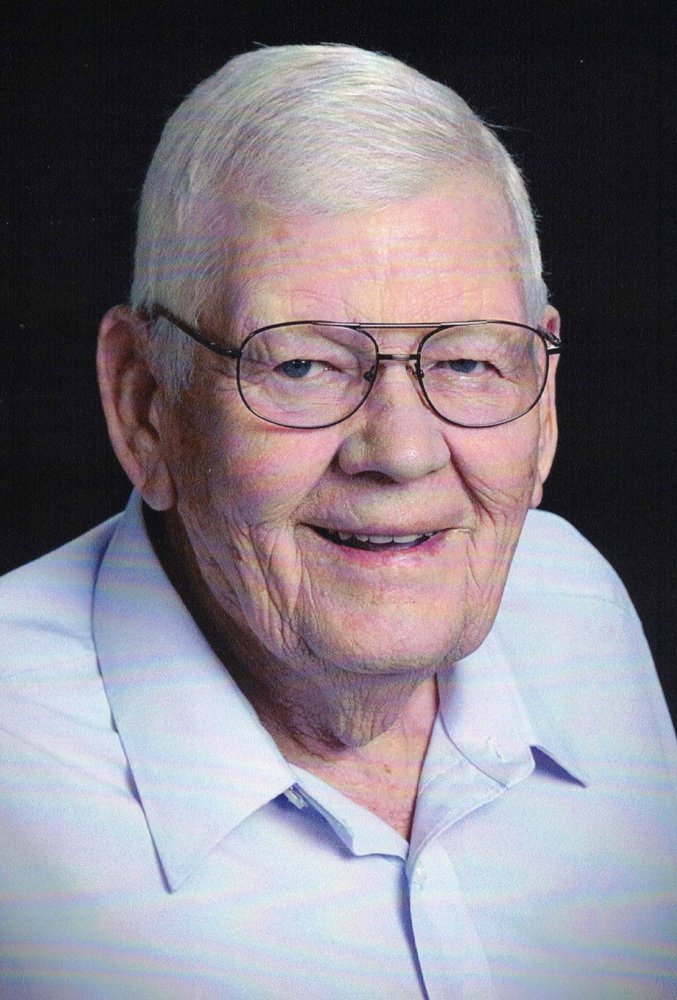 Donald (Don) Julius Lundquist passed away peacefully on May 15, 2021, surrounded by family at Riverview Estates in Marquette, Kansas. Don was born on April 12, 1931, the son of Abner R. and Martha Hawkinson Lundquist on the family farm near Fremont, Kansas, the youngest of four children. He lived and farmed in the Fremont and Marquette communities except for two years in the Army from 1953-1955. Don attended grade school at Fremont then Lindsborg High School, graduating in 1948. He attended a radio and electronics trade school in Omaha for a year after graduation. He returned to the family farm in partnership with his father and brother, LaVern in the 1950’s and continued to farm in the valley until 2001. The partnership also had a cattle-feeding operation. He was preceded in death by his parents, brothers LaVern (Eleanor) and Virgil (Doris), sister Adeline (John) Hult and his first wife Pattie. On October 25, 1952, Don was united in marriage to Pattie D. Steele in McPherson. Together, they farmed in the Fremont area for 49 years. One daughter, Rebecca (Becky) Dawn was born to this union in 1960. Pattie passed away on December 29, 2001. Don spent most of his farming years growing irrigated crops along the Smoky Hill River east of Fremont. He won many awards for his excellent crops of corn and soybeans, including the National Corn Growers Meritorious Service Award in 1996 and the first-ever Corn Impact Award from the Kansas Corn Growers in 2018. Don was a past director of the Kansas Livestock Association. He was past president of the Kansas Corn Growers and served for nine years as Kansas director of the National Corn Growers. He traveled to Washington, D.C. several times while working on various committees formulating Farm Bills and developing new uses for corn, including ethanol and biodegradable plastics. Don and Pat attended many Corn Growers conventions across the United States developing lifetime friendships. He also was an active member of the American Legion, including many years of service on the Honor Guard. Avid Kansas State football fans, Don and Pat were season ticket holders for many years. Purple was the color of the day for Saturdays with a special group of family and friends. 4-H was a family program for them with Becky in the 1970’s and later in the 1990’s with their grandsons Kyle, Kevin and Kurtis in Miami County. Don and Pat followed Becky through her school events and then continued with the three grandsons in later years. Grandpa and Grandma were in the stands to cheer them on in all kinds of activities. On April 10, 2004, Don married Dixie A. Lindstrom at the Freemount Lutheran Church. They made their home in Marquette. Don continued to farm in retirement west of Marquette with Dixie and family. Family was very important to Don. He loved working and playing with the extended Lundquist, Steele and Lindstrom families. Don was a loving, caring husband, father and grandfather who gave a lot of time to nurture his family in health and in sickness. Farming was his occupation as well as his hobby. Reading usually included a farm magazine or articles on the computer about farming. He never retired from learning about farming. Don was currently a member of Elim Lutheran Church in Marquette, after being a lifetime member of the Freemount Lutheran Church. He served on the church council for many years, including two terms as chairman. He enjoyed serving on the cemetery committee, taking over the Freemount Cemetery record keeping from 2001-2013. He enjoyed learning about the cemetery from his mentor, Paul Danielson through the years. Don served on the Freemount Church Foundation board from 2004-2014. Although officially retiring from farming in 2001, he continued to help on the farm for Daryl Shields in the valley and Shayne Fox in Marquette for several years. Don and Dixie enjoyed many trips across the country. Cattle shows, especially when granddaughters Kylie and Kayla were showing, became a new hobby for Don and Dixie as well as attending some Corn Growers conventions and meetings. Don and Dixie moved to Marquette to live in town in 2004 after always living on a farm for over 50 years. During these years the Marquette grandkids became a new adventure for Don and Dixie. They kept “Pappo” young at heart while retiring in Marquette. Known for his great hugs with his family and friends, Don truly enjoyed talking to all his many friends. If you were his friend, you could count on a hug with every hello and goodbye. We will miss those great hugs, Donnie!! Survivors include wife Dixie of the home; daughter Becky Morgan (Jim) of Louisburg; grandson Kyle, Kevin (Whitney), and Kurtis Morgan; stepdaughters Traci (Kevin) Forssberg of Shawnee, Marci (Shayne) Fox of Marquette, Carri (Eric) Thies of Lenexa; great-grandchild Raegan Morgan; step-grandchildren Kylie and Kayla Fox, Logan Forssberg and Savannah Thies; numerous nieces and nephews. Memorial services will be held 11:00 a.m., Friday, May 21, 2021, at Elim Lutheran Church in Marquette, with Pastor Amy Pavlovich, officiating. Private family inurnment will take place at Freemont Lutheran Cemetery, prior to the memorial. Memorial contributions may be made to the Elim Lutheran Church or to the Marquette American Legion Post #253. Memorials may be sent in care of Crick-Christians Funeral Home, 103 N. Washington, Lindsborg, KS 67456.
Friday
21
May

Share Your Memory of
Donald
Upload Your Memory View All Memories
Be the first to upload a memory!
Share A Memory
Send Flowers
Plant a Tree