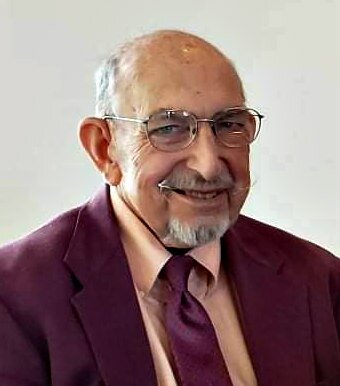 Cyril J.Ulmen “Cy”, 87, of Assaria passed away Nov. 12, 2021 at Salina Regional Health Center, Salina,KS. Cy was born January 18, 1934 in Mankato, MN to Martin Joseph and Lucille (Prom) Ulmen. He had two brothers, Martin John Ulmen, Jr. and Norbert Ulmen, five sisters, Patricia (Ulmen) Juenemann, Mary Ann (Ulmen) Bentley, Iona (Ulmen) Widmer, Theresa (Ulmen)Widmer and Barbara (Ulmen) Gehrke. Cy graduated from Loyola High School in Mankato, MN in 1952. His first 20 years were spent on the family farm. When Cy left the farm he was drafted into the Air Force serving for 20 years, stationed in 5 foreign countries and eight states as a Teletype Installer, serviceman and supervisor. Cy married Barbara Smith on April 21, 1956. They had three children, Thayer, Timothy and Lucinda. After 20 years of Military service he went to work for the Kipp School and Assaria HS. He then worked/retired for Great Plains Manufacturing for 20 years in Salina, KS. Then 10 years for the Renaissance Cafe in Assaria, KS. He loved singing with the Bethany Messiah Chorus for 25 years, a special memory was singing at Carnegie Hall in NYC with the Messiah Chorus. Along with many other singing groups, he was part of was Assaria Lutheran Church Choir, The Silver Tones Chorus which traveled to many nursing homes. Cy loved gardening and for many years had a good size garden, which in later years included flowers. His love for gardening resulted in him becoming a “Master Gardener”. Cy was also an active member of the Assaria Lions Club as well as the McPherson Gem & Mineral Club. At the Assaria Lutheran Church, Cy was Social Ministry chairman for many years. He enjoyed recruiting music groups, vocal and instrumental, for Service and Song each year to support many worthy causes. Friendship was important to Cy, he was a friend to many at Bethany Home along with the Salina, Assaria and Lindsborg communities, he was a stranger to none. He is survived by his daughter: Lucinda (Sheldon) Nelson , grandson Wes. Son: Timothy Ulmen, grandson T.J. (Tegan) Ulmen, great-grandson Quincy. Granddaughter Emily (Jacob) Enz. Granddaughter: Ryan Ulmen, great grandson Tristen Bacon. Brother Norbert Ulmen and sisters Theresa Widmer and Patricia Juenemann. Cy was preceded in death by his parents, wife: Barbara, son: Thayer Ulmen, daughter-in-law: Kara Ulmen , brother: Martin J. Ulmen Jr , sisters: Mary Ann Bentley, Iona Widmer and Barbara Gehrke. Cy thanks everyone who shared with him through the good times and encouraged him through the more difficult times. Visitation will be from 6:00pm-8:00pm Thursday 11-18-2021 at Crick-Christians Funeral Home, 103 N. Washington, Lindsborg, KS. Funeral services will be 1:00pm Friday 11-19-2021 at Assaria Lutheran Church Assaria ,KS. Memorial contributions may be made to the Assaria Lutheran Church or to the Salina Area Emergency Food Bank. Memorial may be sent in care of Crick-Christians Funeral Home, 103 N. Washington, Lindsborg, KS 67456.
Thursday
18
November

Share Your Memory of
Cy
Upload Your Memory View All Memories
Be the first to upload a memory!
Share A Memory
Send Flowers
Plant a Tree