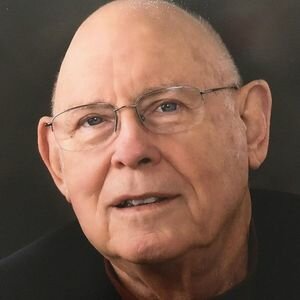 Dr. Richard R. Hahn, 91, fell asleep in Christ on November 29, 2021. Dick was the beloved husband of Joan L. (Fager) for 55 years who preceded him in death. He will be remembered by his four children and their spouses: David Hahn and Cheryl Doherty of Victoria MI, Carol Hahn and Vic Sittig of Normal, IL, Don & Tammy Hahn of Zionsville, IN and Kathy & Rick Hutton of Richmond, VA. As well as his 9 grandchildren and their spouses, Michael, Alexander (Kimberly), Benjamin, Rachel (Matthew), Lily, Elin (Alex), Meredith (Karl), Charis and George and one great-granddaughter with two others great-grandchildren expected. He is also survived by his sister, Marilyn Spongberg, and many in-laws and friends, including Ping Yang and family, Rosy Cardoza, & Johannes Haas. Born in South Dakota in 1930, son of Ray D and Mildred Hahn. Dick was raised in Lindsborg, KS, a community with which he had a lifelong relation and affection. He graduated from Bethany College, Lindsborg in 1952, where his wife was a classmate. They were married in 1953. He received a PhD degree from Kansas State University in 1957. Following graduation, he joined Harvest Queen Mills, Plainview, TX pioneering the commercialization of grain sorghum uses. In 1967, he joined the research staff of A. E. Staley in Decatur, IL and rose to the rank of Vice President of Research and Development. His work at Staley included leading product and process development for products from corn, soybean, wheat, potatoes and other crops. After 22 years at Staley he served as part-time Assistant Dean at the U of Illinois (UIUC) Ag Experiment Station for commercialization of Ag ideas and returned to Kansas in 1989 to establish the Kansas Value Added Center, a state agency to assist Kansas agricultural business. He joined Kansas State University in 1992 as head of the Grain Science and Industry department preparing young people for careers in the grain processing and utilization industries He retired from KSU in 1996 but returned from 2006-2007 as interim Department Head. He travelled extensively overseas evaluating corn, sorghum and wheat processing in Asia, Africa, Central America, and Europe. Dick loved gardening and being with his family and friends. His church was important to him, and he served in a variety of roles. Youth of the church and Christian schools were a special cause. For many years he served on the board of CCSS, an international school support organization. He and his wife, Joan, were involved in hosting international students and shared their home freely for young people’s activities. His professional activities included: President of the American Association of Cereal Chemistries International (1988-89), President of Lead a Child (1997-2004), President of School board of Mt Zion, IL and President of Lutheran School Association of Decatur (IL and Board of Directors, Bethany College, Lindsborg, KS. For many years, he served on the KSU Foundation Research & Commercialization Committee. He was a member of Rotary International, Kiwanis International, and Optimist International at various times.
Tuesday
7
December

A recording and stream of Dick's services will be available on the church's Youtube channel. You may access it by visiting https://www.adventlutheran.org/

Share Your Memory of
Dick
Upload Your Memory View All Memories
Be the first to upload a memory!
Share A Memory
Send Flowers
Plant a Tree