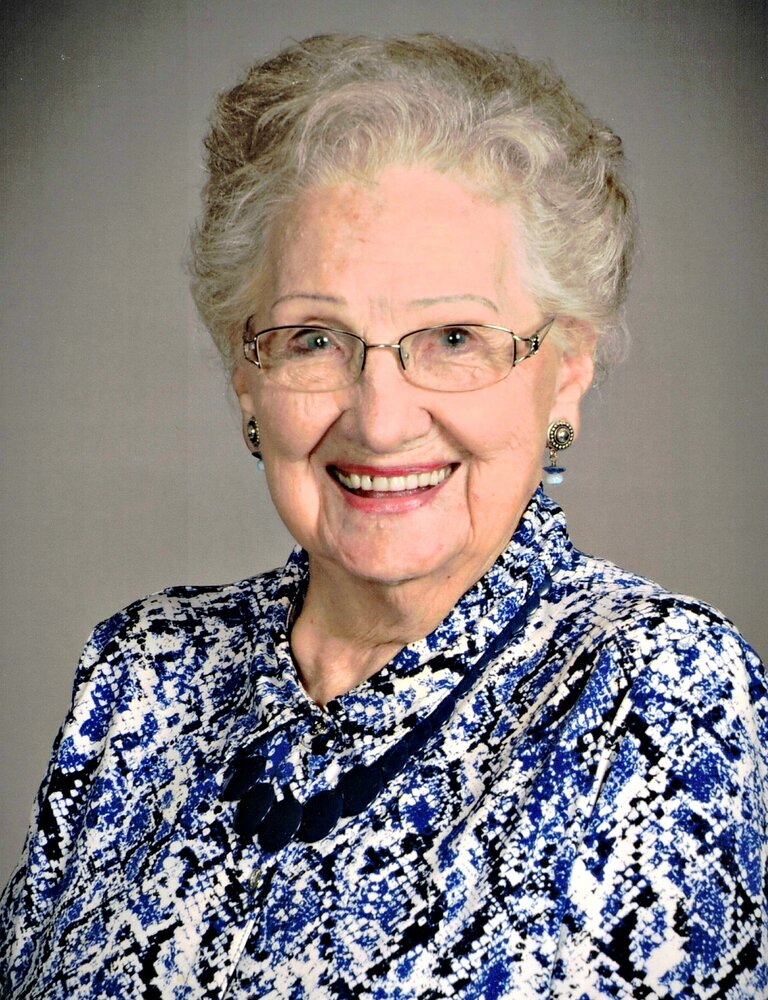 Kathryn M. Frantz, age 95, went home to be with the Lord on December 3, 2021. She was born in the New Gottland Township on June 16, 1926 to Emanuel and Verlie Emeline Keding. Her youth was spent on a farm north of McPherson. When she was eight years old her father was killed in an automobile accident, leaving her mother to raise five young girls in the depth of the Great Depression. Her mother later married her widowed brother-in-law, George Keding, and the family moved to rural Lindsborg. Kathryn began working at a very young age, first at the dairy her mother started and later as a teen at Barrett’s Candy Kitchen, the City Bakery and as a photographer at the Smile-a-Minute kiosk in Liscom Drug Store, all in Lindsborg. She graduated from Lindsborg Rural High School and married Carl J. Frantz of Lindsborg in Durham, NC on April 5, 1944, right before he shipped out with the 35th Infantry Division for Europe. After his recovery from serious injuries received in Normandy and subsequent discharge from the army, Carl and Kathryn established their home in Lindsborg and started their family. Due to his injuries, Carl was unable to work on the family farm so the young couple took over management of the Brunswick Hotel and American Legion clubroom located in the basement. It was in those early years that Kathryn gave her life to Christ. In 1954 the family moved to McPherson where they lived until 1986 when they returned to Lindsborg. During the years they lived in McPherson, Kathryn worked at Raleigh’s Drug Store and McPherson & Citizens State Bank which later became McPherson Bank and Trust and then Bank IV. Kathryn began her banking career as a teller and retired as an officer. She especially enjoyed her tenure as Status 55 Coordinator in which she managed the “club” for senior bank customers. In this position she organized events and trips all over North America. Her trips were so popular she decided to start her own company, Extra Mile Tours, after retirement. All who traveled with her will testify to the fact that she always went above and beyond to make the trips the best they could be. Kathryn and Carl had a good life together. They loved and were loved by their children, grandchildren, great grandchildren and their spouses. They were active in the 35th Infantry Division Association. Relatives, friends and strangers found themselves in Kathryn’s kitchen for “coffee” (plus a spread of various foods) or Swedish pancakes. A testament to the number of lives touched by them was evident when over 600 people lined up to greet them at their 50th wedding anniversary celebration - many coming from out of state. Kathryn is survived by her son, Carl “Dan” Frantz of Redmond, WA; her daughters, Judy Pilewski and husband Edward of Lindsborg, Shirley Miller and husband Bill of Salina, Peggy Weddle and husband Mark of Manhattan, KS, and Susan Achenbach and her husband Scott of Lindsborg. Kathryn is also survived by 19 grandchildren, 36 great-grandchildren, her brother Willard Keding of Lindsborg, sister, Clarice Hayes of Angier, NC, her beloved companion Warren Webster and numerous nieces and nephews. She was days/weeks away from meeting her first two great-great-grandchildren. Kathryn enjoyed singing in the Messiah Chorus for over 50 years, was a wonderful cook and loved attending concerts and programs in which her grandchildren and great grandchildren participated. She was proud of her Swedish heritage and sang the praises of Lindsborg to any who would listen. She was thankful to be able to travel to Europe several times with visits to Sweden and Normandy especially meaningful. Kathryn was a member of Lindsborg Evangelical Covenant Church, the American Legion Auxiliary and the Smoky Valley Historical Association. The most important thing in Kathryn’s life was her relationship with the Lord Jesus. Throughout the trials of her life, she came to deeply depend on and love her Lord. His love for her shone brightly by the way she cared for dying relatives, comforted the grieving, visited the lonely, welcomed people to her home and shared the Gospel. No doubt in the throng of those who welcomed Kathryn to heaven were many there because she helped lead them to a saving faith. She was preceded in death by her parents, her step-father George Keding, her husband Carl Frantz, her son, Richard Frantz, her daughter-in-law, Janet Frantz, sisters, Vivian McCoy, Margaret Nelson, Ellen Box and brother, Robert Keding. The family would like to express their heartfelt thanks to Kindred Hospice of McPherson and Bethany Village. The funeral service will be held at 1:00 p.m. Friday, December 10, 2021 at Lindsborg Evangelical Covenant Church with Pastors Jeff Waugh and Darrell Cooper officiating. A private family burial at Smoky Hill Cemetery will precede the service. To view a livestream of the service go to www.lindsborgcov.org or to the church’s Facebook page, Lindsborg Evangelical Covenant Church. Memorial contributions may be given to Smoky Hill Cemetery or Child Evangelism Fellowship in care of Crick-Christians Funeral Home, 103 N. Washington, Lindsborg, KS 67456.
Friday
10
December

Share Your Memory of
Kathryn
Upload Your Memory View All Memories
Be the first to upload a memory!
Share A Memory
Send Flowers
Plant a Tree